"It's a logical way to engage a group of alumni who are in the same industry—many of whom know of or have worked with one another and didn't even realize there was a Columbia connection," Senior Executive Director for CAA and University Relations Ken Catandella told The Low Down of the new Columbia Alumni Winemakers Collective.

Catandella, along with his Collective co-leaders Brent Bessire '91CC, co-owner of Fogline Vineyards, and Julie Johnson '79NRS, owner of Tres Sabores vineyard, has identified nearly 40 alumni in the wine industry in California alone, as well as alumni winemakers in Italy and France.

"Almost once a week, someone comes up with a name through traveling or word of mouth," Catandella said. "By putting a spotlight on this, we hope others will come forward, too." 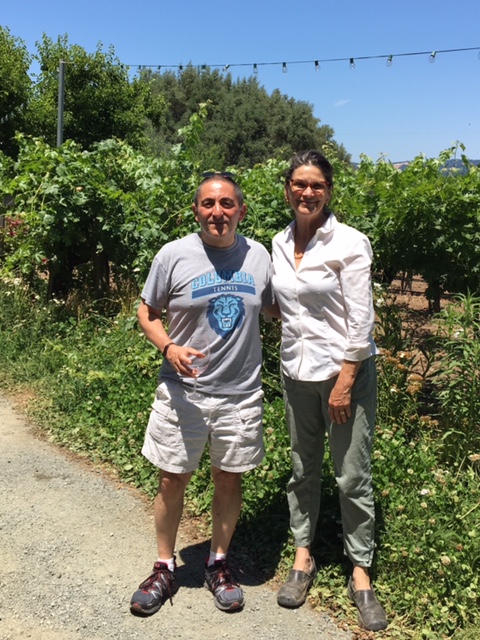 Bessire got his love for wine during his time at Columbia, frequenting restaurants with top wines across New York City with his future wife and father-in-law. He moved to the Bay Area after graduation and was immediately impressed with wine country, the beautiful weather, and great restaurants in the region. After a few moves back and forth from the East to West Coasts, Bessire left his job in the financial services and technology industries, and he settled in California to make wine.

Bessire's Fogline Vineyards, located on the ridge of Sonoma Mountain in Santa Rosa, California, launched in 2009 and produces Pinot noir, Zinfandel, Syrah, and Chardonnay. Bessire and co-founder Evan Pontoriero write on their website about their unique method—because mountain fruit is grown above the fogline, more balanced, focused wine is created.

Bessire looks forward to connecting with both alumni in the industry, as well as alumni who simply like wine.

"It's a great opportunity for both sides of the equation," he said. "Alumni might be interested in visiting wineries somehow associated with Columbia. Why not try something from someone who went to your Alma Mater rather than some giant company making something that's not so interesting."

Johnson, the Collective's third leader, also got her start in a different industry—nursing.

She met a winemaker during her time in New York City at the School of Nursing in the late 1970's and moved out to California with him after graduation. She originally continued her work as a nurse on the West Coast before eventually transitioning into the wine business in 1981 with the launch of Frog's Leap Winery. In 1999, she left Frog's Leap to make wine on her own in St. Helena, California, and Tres Sabores was born.

Although Johnson no longer practices nursing, she remains an active alumna and was thrilled with the opportunity to connect with Columbia through her new industry.

"This is a chance to reconnect with the school that changed my life," she told The Low Down. "We can educate and extend people's passions about wine."

Johnson hopes she can help young alumni hoping to break into the industry. During her interview with The Low Down, she even received an e-mail from a 2008 Columbia alumna and aspiring winemaker looking to make a connection.

The Collective also aims to identify and connect with alumni in affiliated industries, like the restaurant and hospitality fields.

"There are a lot of different opportunities and roles available [in the wine industry]," Bessire said, adding that the Collective also can connect with alumni pursuing traditional business roles in the wine industry, like marketing, sales, finance, and management.

"What will be terrific is encouraging people to do business with one another, as a way of networking and community building," Johnson added.

The Columbia Alumni Winemakers Collective is in its beginning stages, first hoping to finish identifying other alumni winemakers across the globe and build out their running list. From there, Catandella, Bessire, and Johnson have robust, broad-based plans for the group, including tasting events for alumni, featuring alumni-produced wines at CAA events, and making a master list of where alumni wines are sold to make it easier for any Columbian to purchase a bottle and show their support.

"The good thing about this industry as a whole is the willingness for people to help each other out," Bessire said.

Both dinners are at 7 p.m. at New York Vintners on 21 Warren Street in NYC. Register for the Oct. 12 event here. A registration page for the Nov. 7 event will be posted in the coming weeks.

Interested in learning more or getting involved with the Collective? Email [email protected].