Columbia Experts on the Discovery of Gravitational Waves

Last week, physics had a rare moment in the spotlight when scientists announced that they have successfully detected gravitational waves from the merging of two black holes roughly a billion light-years away. This incredible technological and scientific feat confirmed a major prediction in Albert Einstein’s general theory of relativity, published a century ago.

Three Columbia astrophysicists were instrumental in the LIGO (Laser Interferometer Gravitational-Wave Observatory) experiment, by building the complete timing system that was "essential in figuring out the direction in which we hear two black holes colliding." Their excitement was palpable as they took to the stage at Columbia to discuss the finding with an equally delighted Neil deGrasse Tyson ('91, '92GSAS) shortly after the historic announcement on February 11. (View the video here.)

The breakthrough was clearly a big moment for science, but why was it so important, and where will this discovery take us?

Here's what our notable Columbia astrophysicists, scientists, and professors have to say about it:

1. "This discovery marks the opening of a new era in which we will explore the universe using waves of gravity."

- Brian Greene, professor of physics and mathematics at Columbia University.

“This is big. This will go down in science as a pivotal moment. And not just because it’s another spectacular confirmation of Einstein’s ideas, which it is. But rather because, for millennia, we have explored the universe using waves of light."

2. "Up until today, we had been watching the sky. From tomorrow, we can also hear it."

Marka compared a researcher using LIGO to observe the universe to a deaf person hearing music for the first time. "Can you imagine the joy?" he said in Popular Science. "The world would change. This is what LIGO is to astrophysics." He also remarked in Columbia News, "We are looking so far back into the history of the unseen universe that it is the most awesome experience that I, as a scientist, could ever imagine."

3. "The closest you can get to black hole is gravitational waves. There should be no structure to the surface, but if there is, if black holes have any 'hair,' we could detect that."

- Imre Bartos, physics lecturer at Columbia University and one of the lead LIGO researchers.

According to Bartos in this article, 'Physicists, at the moment, have no knowledge about if black holes have any structure. But with the assistance of gravitational waves can originate from the surface — a point of no return called the event horizon.'

4. "The discovery of gravitational waves is on a par with the major discoveries of the last decade, like the Higgs Boson."

"It’s something that we’ve known—Einstein predicted it 100 years ago—but it’s taken us this long to finally be able to confirm it. Like the Higgs, I think this is Nobel-quality work,” said Tuts in Columbia News. 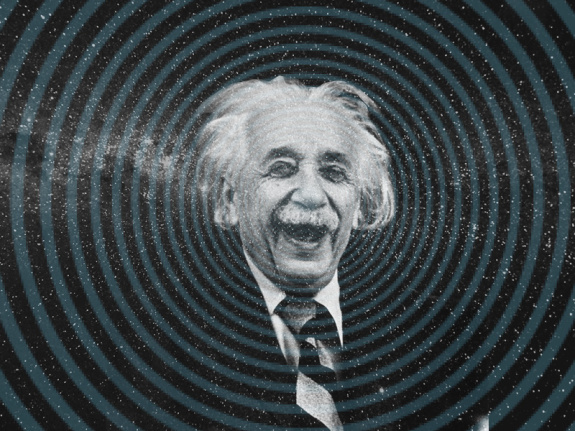 5. "I don't know if there's anything left that Einstein predicted that we can still end up finding out as true. Everything has been correct."

Got more questions about the significance of this out-of-this-world discovery?

As Neil deGrasse Tyson dryly remarked to an electrified room during the LIGO announcement last week, we really ought to go ask the remarkable researchers themselves. "Then you can come back to me, and I'd be happy to tie a bow on it. I'm delighted to actually be in the bow-tying service of science right here in New York City."

Fortunately for us, the remarkable researchers are just down the block - on 116th and Broadway, Columbia University.

And speaking of gravity, we're just going to leave this here.