Think you know about Columbia University? Like movies and pop culture references? Is your NCAA bracket busted but you still want to take part in March competition?

If you answered "yes" to any of the above, you're in the right place.

We've got our own bracket-style knockout tournament underway where we start with eight of the most iconic movies set in or featuring characters related to Columbia University (our "Elite 8," if you will) and look to narrow that list down until we crown a sole champion.

Here's how to participate:

Beginning Monday, March 28 at 10 a.m. EST, take part in the #ColumbiaMovieMadness elimination tournament on the Columbia Alumni Association Twitter account (and directly on this page) by voting daily for your picks to advance in each round. We'll tally up the votes before the start of each daily match up and declare winners to proceed on as we look to crown the most popular movie with references to Columbia University.

Up for the challenge? Here are the contenders: 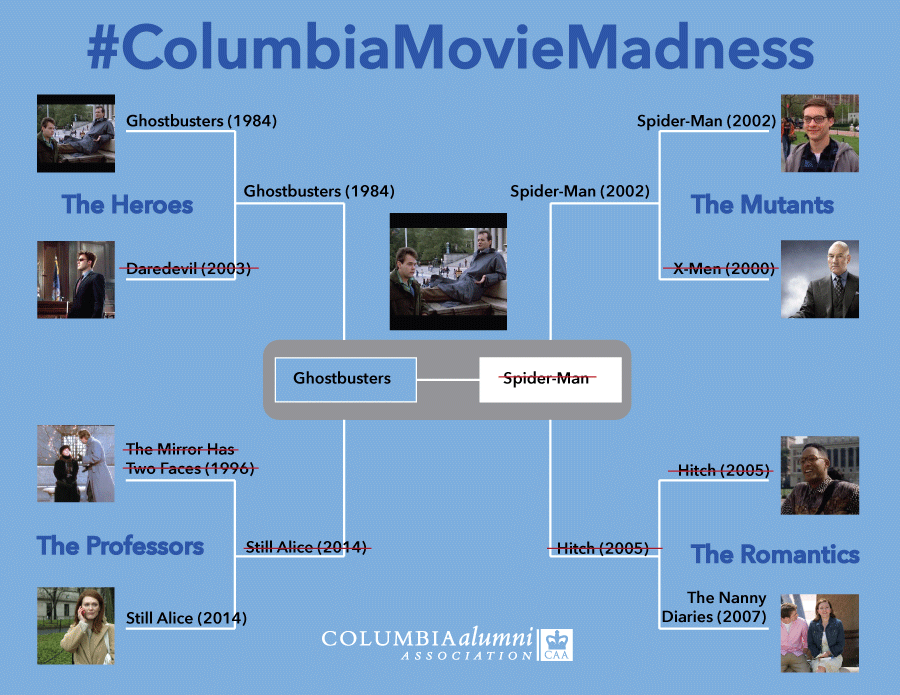 ...And a huge shout-out to Columbia Men's Basketball for wrapping up a historic postseason run and winning the Collegeinsider.com Tournament (CIT) - their first-ever postseason championship! The Lions' 25 wins this season represents the highest total in program history. Relive the championship game moments and keep the celebration going and join the team at the annual Men's Basketball Banquet on April 18. 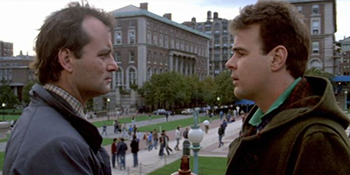 When we first meet the Ghostbusters in this 1984 classic, they are working at “Weaver Hall" as researchers in the Department of Psychology. In actuality, Weaver Hall is Columbia's Havermeyer Hall. And the Ghostbusters/Columbia fun doesn't stop there. The reboot of the movie, which will be released later this year, was seen filming on campus and stars Columbia alumna Kate McKinnon '06CC.

Thank you for participating in the Columbia Movie Madness tournament. Did we miss any movies? Disagree with the picks? Let us know using #ColumbiaMovieMadness and remember to follow the CAA on Twitter, Facebook, and Instagram.

See below for the full recaps of each round

It's time. We've reached the final round of #ColumbiaMovieMadness and narrowed down the most iconic Columbia-related movies to 2 finalists. Will Sam Raimi's Spider-Man (2002) be able to overcome perennial 80's classic Ghostbusters (1984)? Help us crown a champion! Voting begins Monday 4/4 at 10 a.m. and ends on Friday 4/8 at 10 a.m.

The dust has settled on Round 1 of #ColumbiaMovieMadness and your final four movie contenders are officially set. Welcome to the semifinals! This special double header round pits Ghostbusters (1984) against Still Alice (2014) and Spider-Man (2002) against Hitch (2005). Voting for both match ups begins Friday 4/1 at 10 a.m. and ends on Monday, 4/4 at 10 a.m. Who will make it to the finals?

The first match-up of the semifinals is Still Alice vs. Ghostbusters. Make your pick! https://t.co/fMci43XWCq

Round One begins! A team of paranormal investigators or a crime-fighting superhero? Vote now! #ColumbiaMovieMadness

(Before you ask, the answer is yes, we realize the irony that Professor X is not in this region)