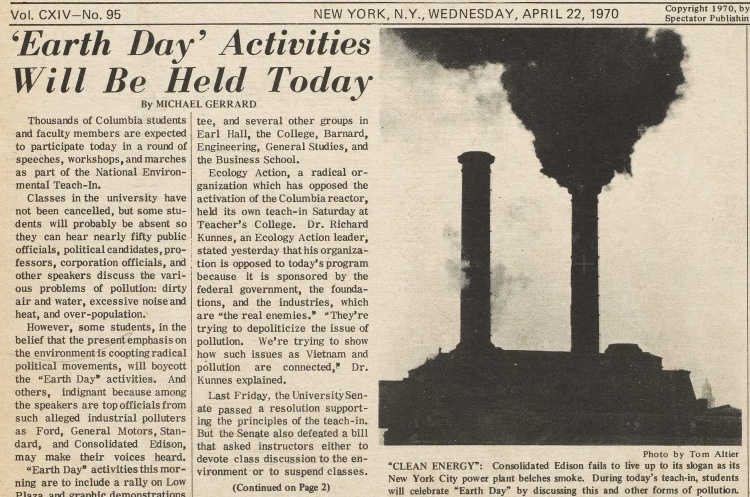 Coverage from the Columbia Daily Spectator

Not only was April 22, 1970, the first Earth Day celebration on campus, but as the Spectator Archives can attest, many other things were happening in Morningside. For instance, the University Senate was trying to get Columbia trustees to use the University's 57,000 shares of General Motors stock to pressure the company to reform its safety and environmental policies.

Fast forward to 2017, two Columbia alumni clubs are hosting Earth Day talks. If you're in the Texas or DC areas, be sure to check them out:

Farmers, Scientists, and Spacecraft - Climate Change and the Impact on Smallholder Farmers

Join us the night before Earth Day and the March for Science in DC to learn about how farmers are working directly with scientists to analyze the risk of climate change! This is a great way to kick off a weekend of science and learning with one of the Columbia Earth Institute's lead scientists!

In honor of Earth Day, the homepage of ColumbiaYou will feature faculty, alumni, and students who are committed to helping the planet. This environmental homepage takeover will stay live on the site until May 8. Here are a few of our favorites: