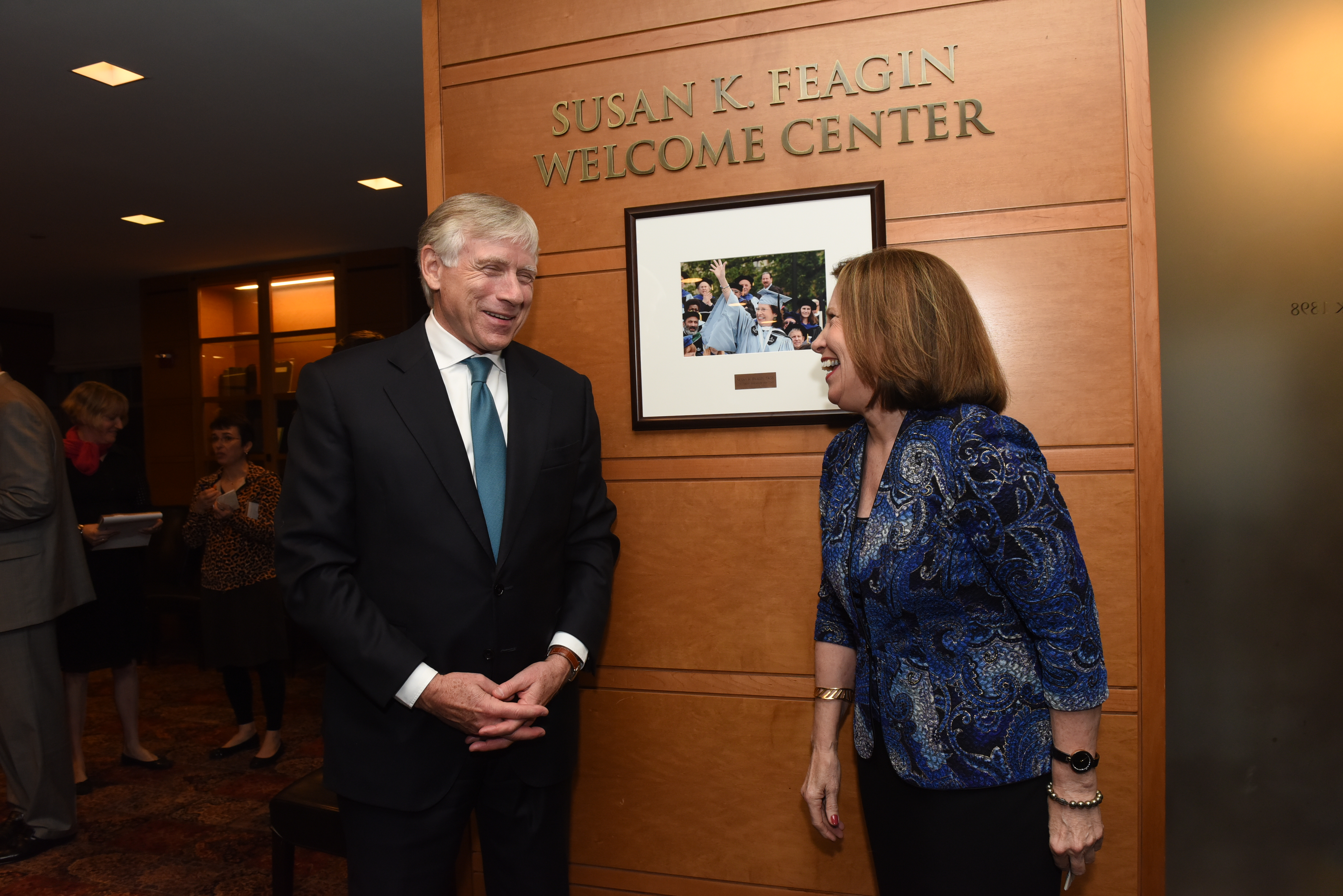 [November 16, 2015] -- Today, Columbia University President Lee C. Bollinger formally dedicated the Susan K. Feagin Welcome Center at the Columbia Alumni Center “in recognition of her extraordinary accomplishments and exemplary service to the University,” according to a special Trustee resolution.

“The defining characteristic of Susan’s extraordinary accomplishments lies in her deep capacity to draw people in and to work together to achieve seemingly unattainable goals.  Columbia, and higher education generally, have been the grateful beneficiaries of this remarkable ability,” said President Lee C. Bollinger.  “It is most appropriate that we celebrate her achievements here, in the house that Susan built.”

Susan Feagin ’74GS has had a distinguished career at Columbia, most recently as special advisor to President Bollinger. From 2003 to 2010, she served as the executive vice president for University development and alumni relations, during which time she brought together alumni, donors, and friends to achieve the largest fundraising effort in Ivy League history, the $6.1 billion Columbia Campaign.

Together with Trustees and other alumni leaders, Ms. Feagin was instrumental in the creation of the Columbia Alumni Center at 622 West 113th Street. Since 2009, the Center has provided a home away from home and a place for gatherings and meetings for Columbia alumni, and serves as the administrative hub for the Office of Alumni and Development and the Columbia College Office of Alumni Affairs and Development.

“Susan forged a new era of professionalism and collaboration,” said Amelia J. Alverson, executive vice president for university development and alumni relations. “By raising our sights, and building partnerships with colleagues, alumni, friends and deans, she set the stage for Columbia to accomplish more than any of us ever imagined possible.  We owe Susan a tremendous debt of gratitude for her visionary leadership and unwavering commitment to advancing Columbia.”

Susan Feagin’s tenure includes the creation of the Columbia Alumni Association, the global network linking all University alumni – now numbering more than 320,000 strong. It is one of many University-wide efforts she has spearheaded.

Ms. Feagin oversaw the relaunch of Columbia Magazine as a vehicle for communicating with all Columbia alumni around the world, and the successful celebration of Columbia’s 250th anniversary in 2003-2004. Her guidance and support have been critical in reenergizing the Columbia University Club of New York.

She began her career at the University’s development office in 1974, after receiving a bachelor of arts degree from Columbia’s School of General Studies. From 1982 to 1987, she directed the Arts and Sciences component of Columbia’s University Campaign. Between her three stints at Columbia, she held major roles in development and alumni relations at Harvard University and the University of Michigan.

Ms. Feagin is internationally recognized for her leadership in higher education, and her honors include the 2014 E. Burr Gibson Lifetime Achievement Award from the Council for Advancement and Support of Education (CASE). At Columbia, she has been honored with the 1998 Owl Award from the School of General Studies, a 2011 CAA Alumni Medal, and now lasting recognition in the alumni home built under her leadership.