Caitlin Margaret '11SW, a Brooklyn-based holistic life coach, moved back to the United States in July from India, where she'd lived and worked for five years following her graduation from Columbia School of Social Work.

Her return to New York was unexpected, Margaret explained Wednesday, relaxing backstage at the Jerome L. Greene Performance Space, before addressing a group of Columbia alumni at the Columbia Alumni Association (CAA)-sponsored Health and Wellness Program.

"It wasn't really the plan. My dad and my niece both got really sick in one year," Margaret told The Low Down. "I came back to be with family."

Living in India, Margaret became interested in spirituality and mind-body practices while working on a fellowship with various social enterprises that developed informational software and worked to address health issues faced by impoverished people in India. 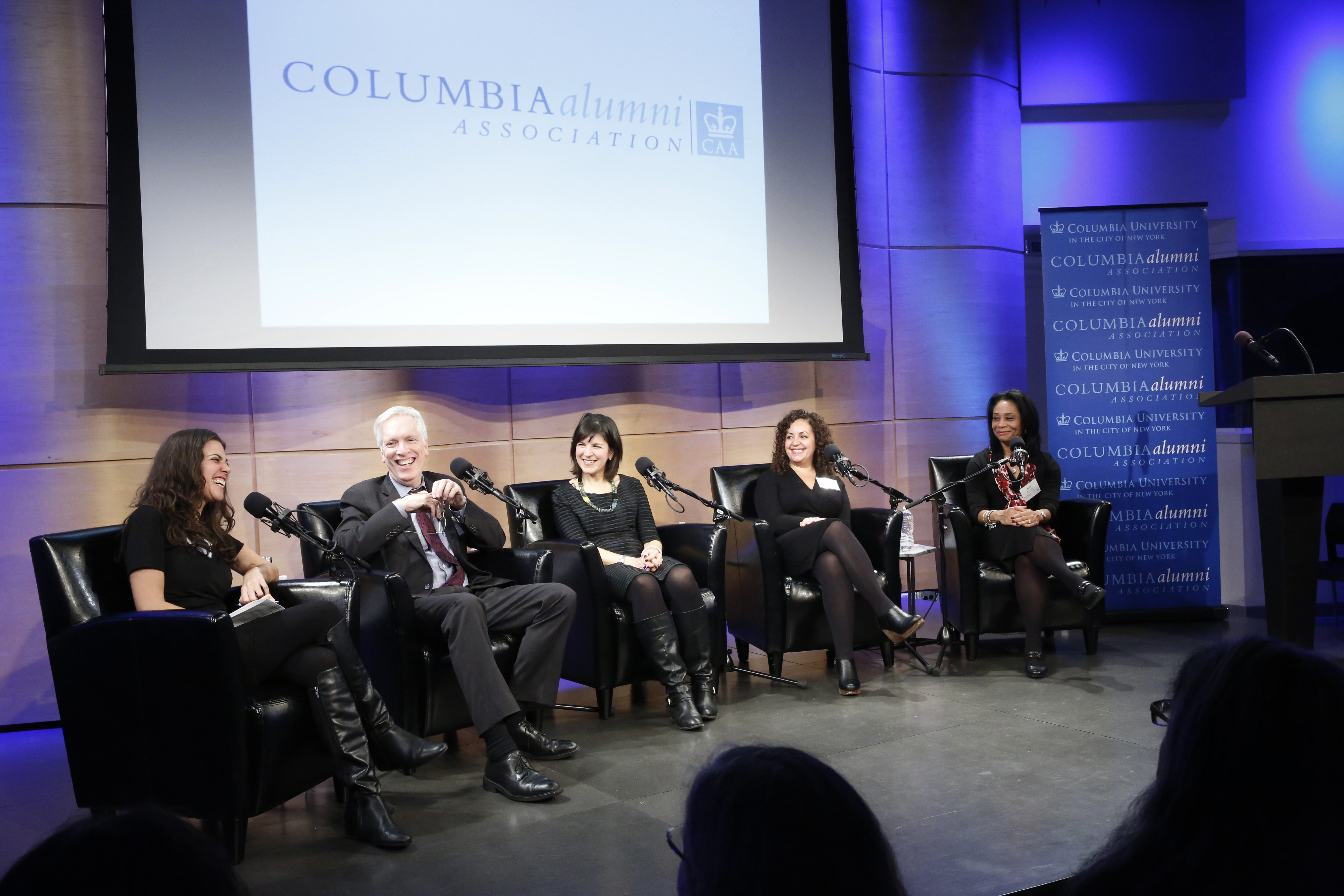 "India is kind of an extreme experience in many ways, especially when you work with the rural poor," said Margaret, a Long Island native. She began studying yoga, Reiki, and meditation on the side; these practices now inform her life-coaching business.

The interdisciplinary nature of Margaret's work on public health in India reflected a wider trend at Wednesday's panel, where all the panelists discussed the importance of cross-discipline health work.

"I'm here because I'm one of only two nutritionists in the College of Dental Medicine," panelist Christie Lumsden '09, '13TC said before the event. Lumsden, an associate researcher at CDM, pointed out that there is a clear—though "largely unstudied"—connection between nutrition and common oral health problems like tooth decay and periodontal disease.

Panelist Rose Rodriguez '87, '06NRS, a pediatric nurse practitioner who worked for years with heart failure and transplants in children, told The Low Down she decided to seek another degree as a nutritionist after noticing in her patients a similar connection between nutrition and cardiac health.

During the panel, political scientist Michael Sparer, a professor of health policy and management at Mailman School of Public Health, emphasized the importance of collaboration between legislators and public health workers.

"There was an election recently," Sparer joked before pointing out that some important public health and environmental programs could be at risk.

Another hot topic at the panel was behavioral change, or how health workers can persuade the public to take it upon themselves to change harmful behaviors before it seriously impacts their health.

"It's about asking, 'How can I incorporate these behaviors into my life?' " said panelist Dawn Aubel '98NRS, '98PH, '16TC, a nurse practitioner who has worked extensively with employee populations and cancer survivors. "It's thinking about, 'I don't have forever here on this Earth. What can I do to take care of myself?' " 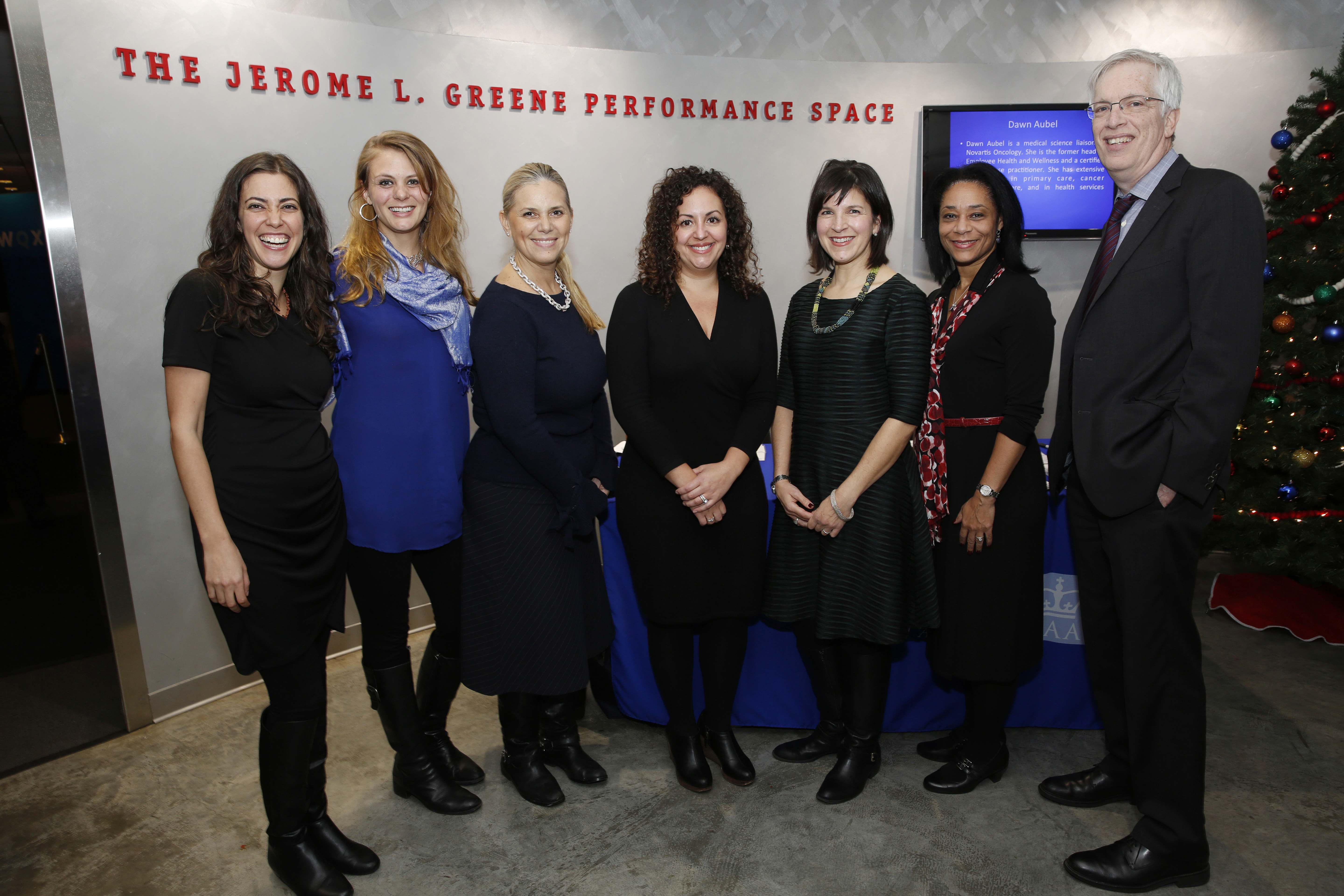 Sparer and Lumsden pointed out the importance of social determinants; factors like diet, class, income, and level of education can greatly impact public health, they said, partly due to what Lumsden called the "unbelievable" accessibility of unhealthy foods at low cost.

The panelists also offered some easy preventive measures people can take to protect their health and the health of their families. These can be as simple as parents cooking nutritious food with their children, or walking up and down a staircase together a few times.

"There are little changes that we can make that we have to celebrate to get to the bigger goal," said Rodriguez, who ran her first full marathon this week. "Short-term goals lead to bigger goals."

Lumsden emphasized the importance of good hydration and taking time to relax.

"Carry around a water bottle. That's a life saver," Lumsden told the audience during the panel.

"Take a minute, two minutes—five minutes if you can—to do something for yourself, like sitting with a newspaper and a cup of coffee. Just for mental wellness, to de-stress a bit."

Francis Carr is a student at Columbia Journalism School. He is a writer and reporter for the Office of Alumni and Development's CAA Marketing and Digital Initiatives team.