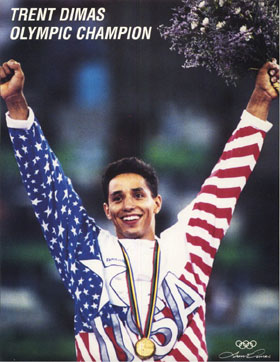 Trent Dimas graduated from the Columbia School of General Studies in 2002. He also worked for an advertising agency in New York, graduated from law school, coached gymnastics at Yale, and now works as a fundraiser for the University of Colorado School of Medicine.

But before doing all that, Trent won a gold medal in gymnastics at the 1992 Olympic games in Barcelona, Spain.

In honor of this year's Olympics in Rio, we wanted to give you a glimpse into the world of an olympic athlete. How one gets to that level of competition, what it’s like to qualify for the games, what it’s like to actually win, and what comes after.

Trent was the perfect tour guide through all of this. So, we were lucky enough to speak with him via phone in his hometown of Albuquerque, New Mexico about his road to the Olympics. Turns out, it wasn’t a very easy one.