Rio is experiencing something of a moment right now, thanks to the Olympics. So, whether you're already in the city, planning a trip post-Olympics, or are just curious about the "cidade maravilhosa" (marvelous city), we asked a Rio local (the Vice President of the Columbia Alumni Club of Rio) to offer her top 10 tips, activities, and must-sees.

Should you plan to be in Rio in August, be sure to join the Rio Club for a special happy hour at Bar Astor on August 11. Mix, mingle, and celebrate Columbia by the beach. RSVP here.

Rio de Janeiro has so much to offer that it’s hard to pinpoint ten must-dos. While the VisitRio website will help you get a general lay of the land, and includes most major attractions, here is our list of local favorites.

This sheltered corner of Copacabana Beach is the best, and safest place to experience open water swimming. It is popular for stand-up paddle boarding as well.

Several swimming groups meet Mon-Sat from 6 to 10 a.m. and all will allow you to join in for an "aula experimental," (sample class) while some offer stand-alone rates for single sessions. Most have loaner goggles and swim caps, but it's best to take your own. Don’t be surprised if you catch a glimpse of a sea turtle gliding by as you near the walls of the Copacabana Fort—they are regulars!

Equipe Navegantes meets on the beach across from the intersection of Av. Atlantica and Souza Lima.  Single sessions are offered for R$40 and include guidance from an instructor in a kayak.  Go here for more personalized attention and guidance. 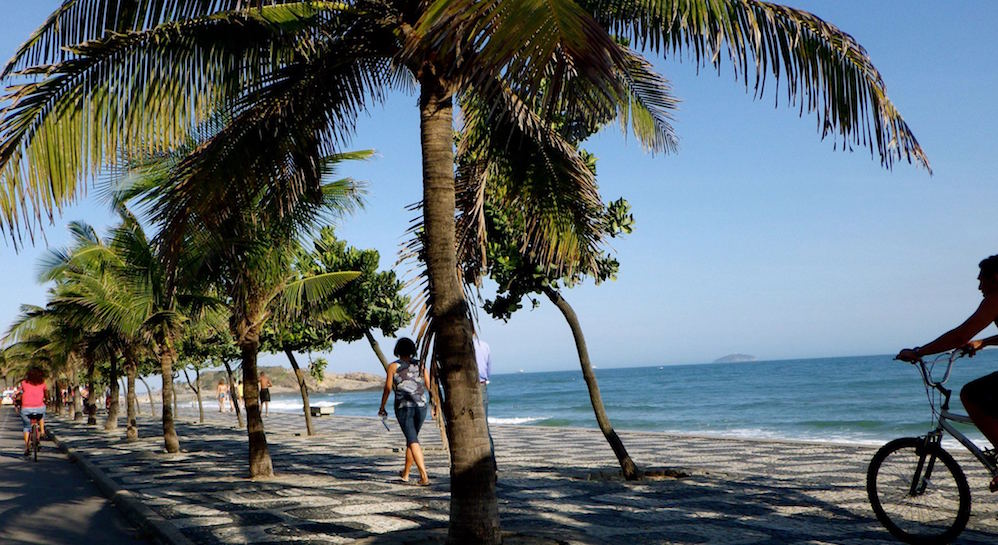 With 186 miles of bike paths, Rio is a cyclist’s heaven! The most beautiful and safest routes follow the beaches and circumvent the Lagoa de Freitas (the lagoon) in the South Zone, though Lagoa should be avoided after dark. Remember, many use these paths for transportation, and the rules of the road apply. Use a helmet and rent a bike from a local shop. The shop Ciclovia on Rua Francisco Otaviano in Arpoador is a good choice, or try the city-sponsored bike stations (all along the beach). 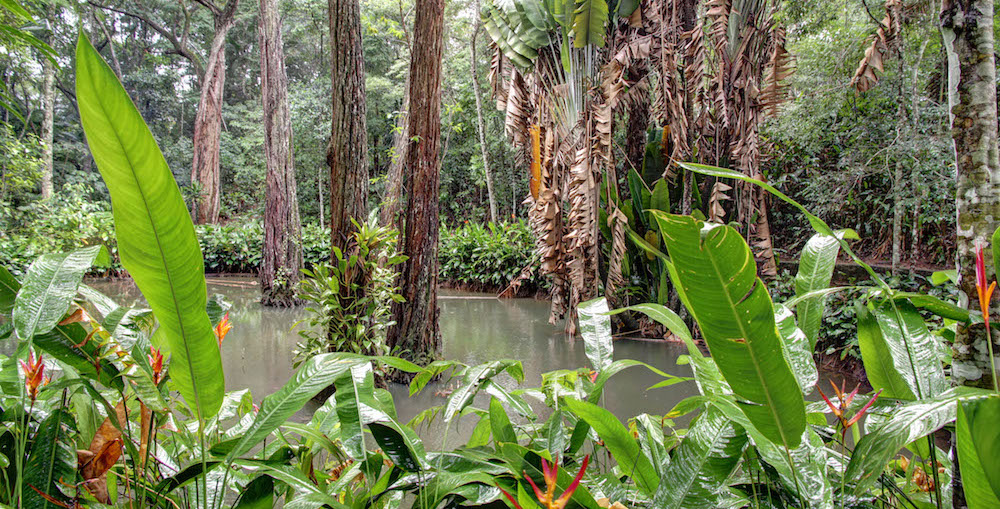 Rio boasts the largest urban forest in the world, the Floresta da Tijuca. And within its borders you will find Corcovado, Pedra Bonita—where you can just hang out and take in the view or go Hang Gliding, the Botanical Gardens, Parque Laje, and miles of trails and hidden waterfalls.

Free, guided tours of the Tijuca Forest are offered every Wednesday at 9 a.m. According to the website, there are two routes offered: "The first runs along paths and ruins that refer to slave labor on coffee plantations and forest recovery process, especially the Waterfall of Souls, Fairy Lake, and Midosi ruins  The second addresses the relationship of various artists with the park, such as the painters Nicolas Taunay and Cândido Portinari, the Glaziou BurleMarx and landscapers." 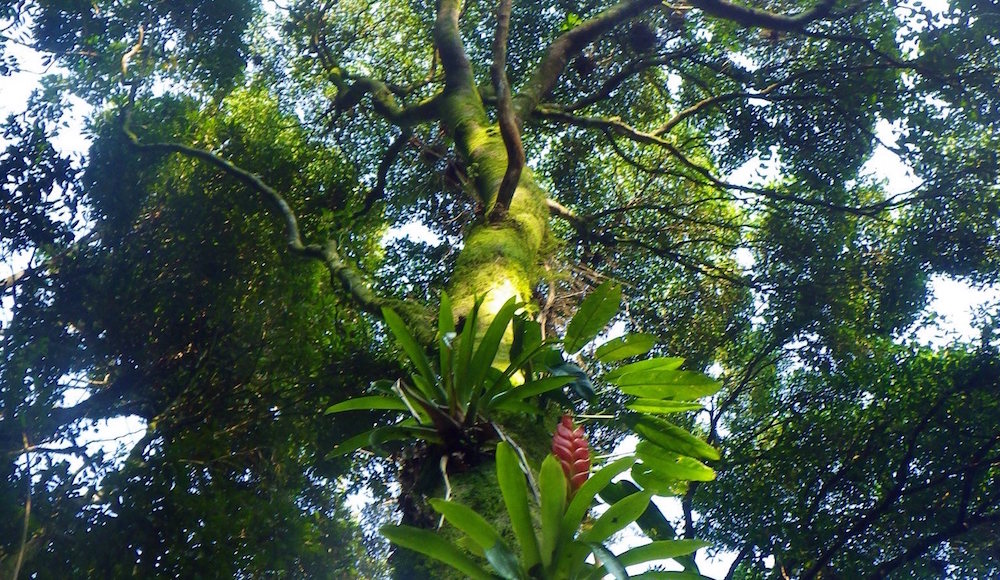 With nearly 50,000 acres, Parnaso is Brazil's third oldest national park and boasts a well-managed infrastructure with trails, waterfalls, a large natural swimming pool, visitor center, and camping facilities. Its main entrance is in Teresopolis, just 90 km from Rio. Buses to Teresopolis leave several times from Rio's main bus station, and there are many hotels, as well as B&Bs, to choose from once you arrive. 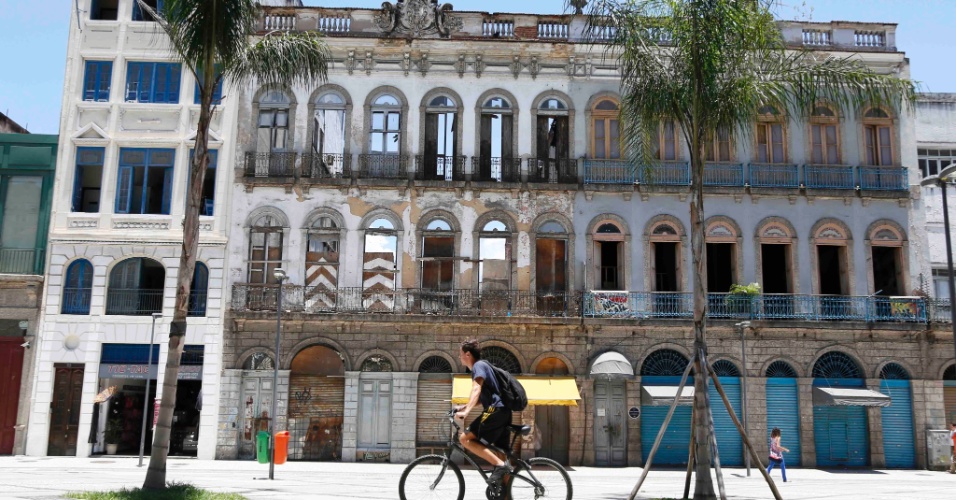 If you're in the Porto Maravilha area during the day, be sure to take some time to visit Praça Tiradentes, where you will find Columbia's own Studio X Rio, and Rio's new Centro de Referência do Artesanato Brasileiro, which displays and sells handicrafts from all over Brazil.

And at night, go dance at Rio Scenarium, a spectacular nightclub right around the corner from Praca Tiradentes. Arrive a bit early, before 10 p.m., to avoid the lines, and plan to stay until well after midnight, when things really start to cook. Located in a renovated warehouse, Rio Scenarium has three floors with a central balcony over-looking the dance floor, and passages into neighboring buildings that are now part of the sprawling complex lead to more dance floors with more live music. The main dance floor tends to feature samba and choro, while you might find funk, jazz or even gafieira music in the adjoining buildings. Yes, it's touristy, but locals love it, too! 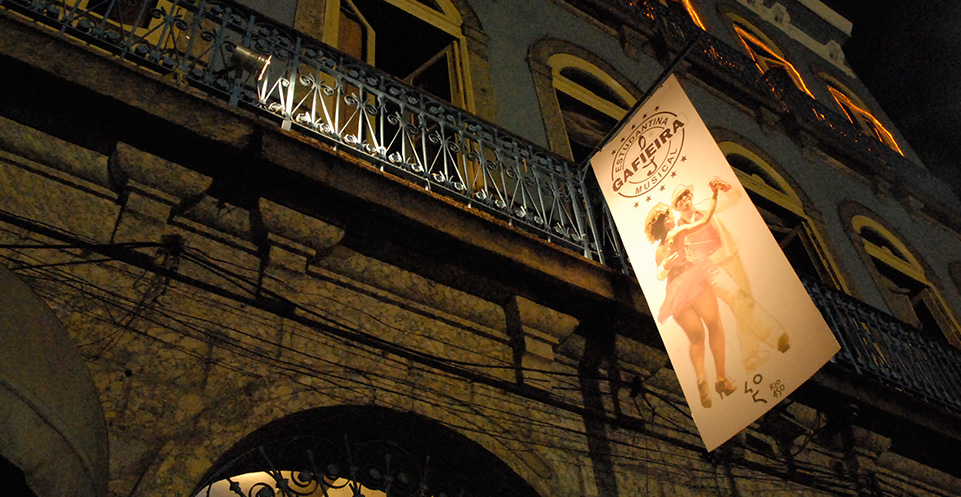 6. Listen to Music at Estudantina Musical

If the lines at Rio Scenarium are too long, or you just want a little adventure, check out Estudantina Musical, which is located right around the corner at Praça Tiradentes. Founded in 1929 as a ballroom dancing hall, it was recently restored and now offers live music with Forro every Tuesday, Samba on Wednesdays, traditional ballroom dancing on Saturdays until midnight, and a new show, Ginga Tropical, all other nights. 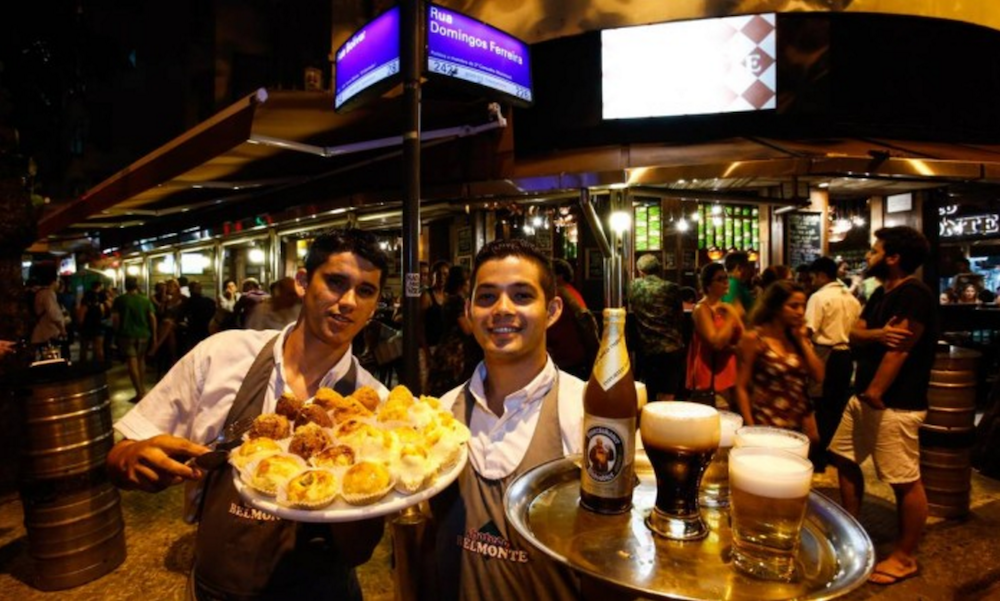 If you are in the mood for a little late night people-watching, mingling, and fun, head over to Baixo Gavea, aka BG (pronounced Bay-Jay in Portuguese), which is basically the intersection of the Praça Santos Dumont and R. José Roberto Macedo Soares. There you will find several bars and restaurants where you can grab a bite or a drink, and lots and lots of twenty-somethings mingling in the street, sidewalks—everywhere. Thursday and Sundays are reportedly the best nights for BG. Another close-by favorite is Palaphita Gavea, which is in the Jockey Club (note: they won’t let you into Palaphita if you’re clad in Havianas, so wear shoes).

Copacabana has its own "Baixo" now, which has the intersections of Rua Bolivar and Domingos Ferreira as its axis. Again, lots of bars and restaurants, and more 20-30 year-olds than they can hold. 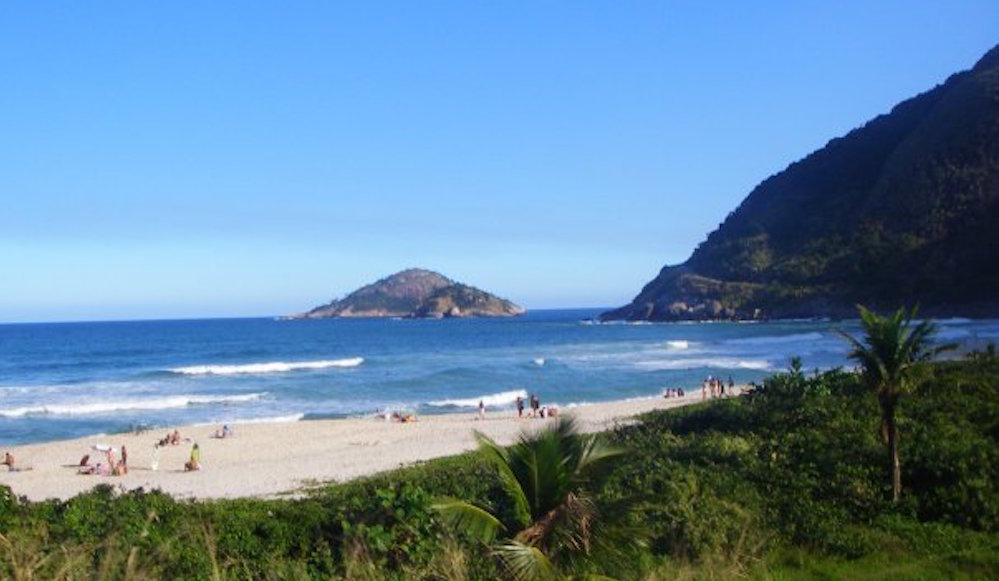 This beautiful, wild beach is located in an ecological reserve about 30-45 minutes outside of Rio. Here’s the scoop, according to the website, Gringo-Rio.com: "Prainha, is considered to be the best surf beach in Rio. It has a few quiosques with food and drinks. Avoid weekends, too crowded! The best way to get there (if you don’t have a car) is The Surf Bus. It is a specially designed bus that can take up to 30 passengers with their boards. They run everyday and have English speaking staff on board." 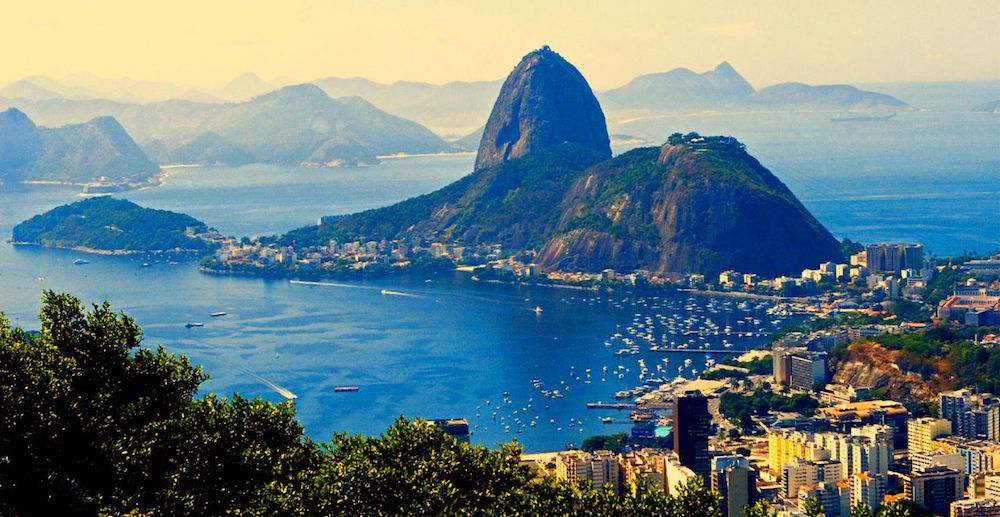 I know, it's not exactly a secret, being among Rio's most iconic images. But too many times, people seem to rush through their visit to the Sugarloaf and it's best to plan to spend a few hours, both up on the mountain, exploring it's paved trails through the bamboo thickets, and below it, strolling along the Pista Claudio Coutinho, a walking path that extends from Praia Vermelha.  Then, go to the restaurant Terra Brasilis and enjoy a caipirinha by the sea. 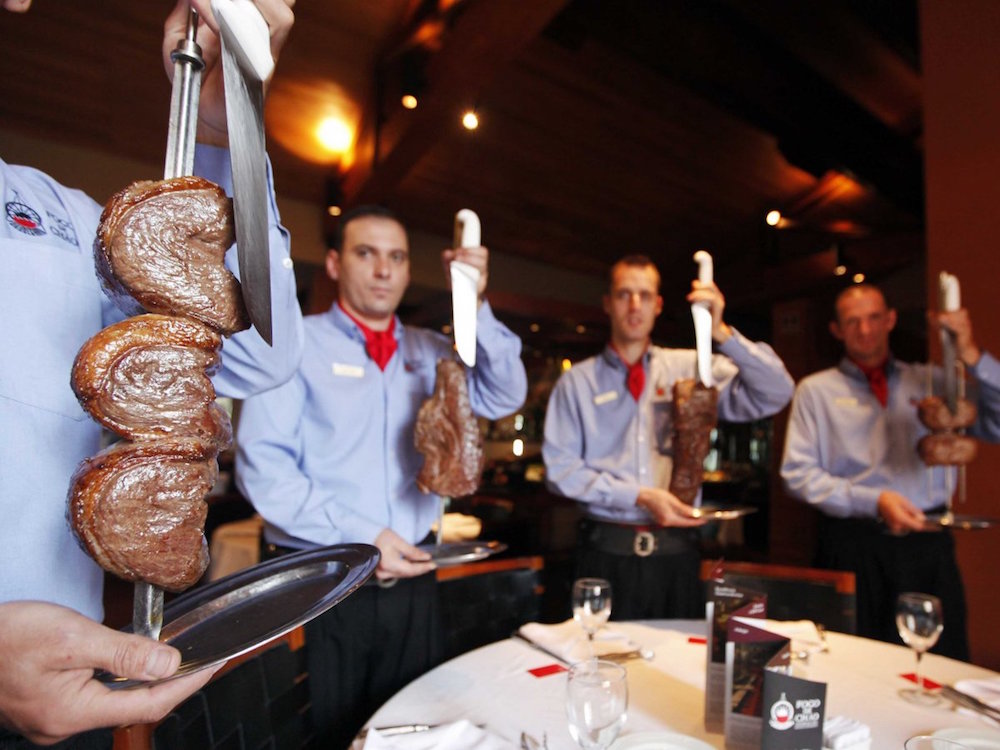 A "churrascaria" is a Brazilian steakhouse that offers a wide variety of freshly barbecued meats served table-side, right on the skewer, from which diners grasp slices with tongs. Most also feature an extensive salad bar, sushi, chicken, and seafood. It's always a fixed-price menu for the main meal; drinks and desserts are charged separately. You can go high brow and head to Fogo de Chão, or opt for the more modestly priced Carratão. But go. It's a great experience and guaranteed to be delicious!

Looking for even more things to do in Rio?

Check out these 10 things to do in Rio (and avoid the Olympic crowd) from Bruno Pantaleão, Program Assistant for the Columbia Global Center in Rio:

1. Go to the beach in Ipanema and just lay there for as many hours as you can.
2. Take a Mototaxi to the top of Vidigal (a favela in Leblon) and watch the sunset from the bar at the top.
3. Hike to the Christ the Redeemer through the trail that starts in Parque Lage. You will see a couple of waterfalls on the way.
4. Hike up Morro da Urca on your way to the Sugarloaf mountain.
5. Drinks at Bar Urca's Ocean Wall during nightfall. Best place to eat pastel too.
6. Spend a morning hanging out in Santa Teresa. Parque das Ruínas is a must!
7. Visit the Botanical Garden in the afternoon, dinner at Braseiro and a beer at Baixo Gávea.
8. Visit the Horto Waterfall and the Chinese View. They are in the middle of the Floresta da Tijuca. Is a 15 minute drive from the heart of Zona Sul and you're in a forest.
9. Bike through the Aterro do Flamengo and Downtown all the way to Praça Mauá to visit the Museu do Amanhã and the Museu de Arte do Rio.
10. Lapa!