Kick off the summer with a great read from the Columbia Alumni Bookshelf.

From informative books to help you study ahead of the 2016 presidential election, to guides on cooking and history, we compiled on The Low Down a list of can't-miss reads from this special all-Columbia bookshelf.

From William McKinley to Teddy Roosevelt and Warren Harding, Greenberg looks at the history of presidents campaigning and how they have presented and sold themselves to the American people.

Greenberg holds three degrees from Columbia's Graduate School of Arts and Sciences ('96, '98, '01) and is an associate professor of History and of Journalism & Media Studies at Rutgers University.

P.S. This book is also on our list of election season reading! Get the full list here.

From the recipe novel to the celebrity chef, Gilbert explores the poetics and politics of food. She examines the relationship with food and eating through literature, art, and popular culture.

Want more on the Columbia/food connection? Check out our Low Down article on an intellectual compilation of history, recipes, chefs, and even food startups coming out of the University. 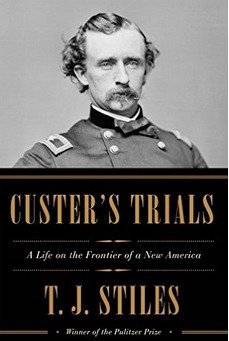 Stiles, a freelancer writer, won the Pulitzer Prize this year for the book, which is a biography of General George Armstrong Custer that, according to Amazon, radically changes our view of the man and his turbulent times.

For a list of Columbia alumni who have won a Pulitzer Prize, check out our Low Down roundup on the subject.

Told in a series of alternating flashbacks, Beechwood Park is the story of twins Cait and Abby—one fated to destroy the other—mirroring the downfall of Cain and Abel.

Abby has always lived in the shadow of her violent sister Cait. Growing up under the oppressive yolk of their religious grandmother, Estelle, the girls are driven apart by jealousy and fear, fueled in part by their poverty and the unspoken secret of their illegitimacy. When Abby finally leaves small town Kansas behind, she sets out for New York City and immediately finds herself swept up in the cultural revolution of the 1960’s. From the Greenwich Village folk scene to the Civil Rights Movement to the violence and instability of Vietnam protests, Abby begins to forge a life for herself with her revolutionary boyfriend, Blake. But hope quickly turns to violence, drugs and instability.

As anti-Vietnam protests roar through college campuses across the country, Blake and Abby find themselves plunging headfirst into the dangerous underworld of anti-establishment counterculture, until a tragic accident forces Abby back into her sister's life. When finally confronted with her family's darkest secrets, Abby sets out to find her father. But what awaits her in Beechwood Park? Will Abby find the reunion she's always longed for, or something more sinister? It seems only her sister, Cait, truly knows.

Moody's novel unfolds not through conventional letters but online hotel reviews, written by Reginald Edward Morse, a top reviewer on a fictional website.

Read the full review of the book in Columbia Magazine.

The never-before-told inspiring history of Ronald Reagan's first quest for the presidency in the late 1960s and how he almost became the GOP nominee instead of Richard Nixon. Also, how behind the scenes, former president Dwight D. Eisenhower (also former president of Columbia University) was Reagan's hidden political mentor, and that Reagan's major public political foe was Robert Kennedy.

For more election-related reading, our must-read list is here.

After losing his job, Kravitz—a man who had always worked too hard and too much—took stock of his life and decided to spend an entire year making amends and reconnecting with the people and parts of himself he had neglected. Kravitz embarks on ten journeys, traveling everywhere from a refugee camp in Kenya to a monastery in California, and learning along the way that the things we let slip are exactly those that have the power to transform, enrich, enlarge, and complete us.

Notorious RBG, inspired by the Tumblr that amused the Justice herself and brought to you by its founder and an award-winning feminist journalist, is more than just a love letter. It draws on intimate access to Ginsburg's family members, close friends, colleagues, and clerks, as well an interview with the Justice herself. An original hybrid of reported narrative, annotated dissents, rare archival photos and documents, and illustrations, the book tells a never-before-told story of an unusual and transformative woman who transcends generational divides. As the country struggles with the unfinished business of gender equality and civil rights, Ginsburg stands as a testament to how far we can come with a little chutzpah.

What We See When We Read
by Peter Mendelsund '92CC

What do we see when we read? Did Tolstoy really describe Anna Karenina? Did Melville ever really tell us exactly what Ishmael looked like? The collection of fragmented images on a page—a graceful ear there, a stray curl, a hat positioned just so—and other clues and signifiers helps us to create an image of a character. In fact, our sense that we know a character intimately has little to do with our ability to concretely picture our beloved—or reviled—literary figures. In this remarkable work of nonfiction, Knopf's Associate Art Director Peter Mendelsund combines his profession, as an award-winning designer; his first career, as a classically trained pianist; and his first love, literature—he considers himself first and foremost as a reader—into what is sure to be one of the most provocative and unusual investigations into how we understand the act of reading.

The Hard Things About Hard Things: Building a Business When There Are No Easy Answers

Horowitz, cofounder of Andreessen Horowitz and one of Silicon Valley's most respected and experienced entrepreneurs, offers essential advice on building and running a startup—practical wisdom for managing the toughest problems business school doesn’t cover, based on his blog.

In addition to these books, check out our Low Down podcast "Columbia Story Time," in which we recorded readings of excerpts from three alumni-authored books, with a little help from some Columbia staffers. Visit the Columbia Alumni Bookshelf for even more great reads.

Are you an alumni author? Check out these resources: